THE DONUZLAV LAKE IN CRIMEA AND PICTURES OF DONUZLAV
In 1961 the Donuzlav Lake was connected to the Black Sea by inlet, in fact turning the lake into the bay of the Black Sea. It is the largest lake of Donuzlav Tarhankut group of lake and the deepest lake in the Crimea and in Europe. 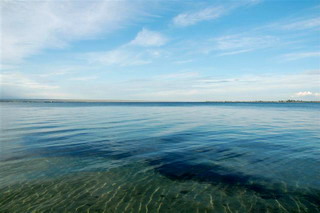 As a result of instrumental measurements of water currents in the Donuzlav Bay medium and anomalous values of flow velocities were defined, also two layers of oppositely directed flows of water in the bay were revealed. Due to wide-tide movements of water across all the area of the bay of Donuzlav there is an intensive exchange of water from the bay in the Black Sea and vice versa, which is confirmed by comparing of measurements of hydrochemical characteristics of the bay and the Black Sea. 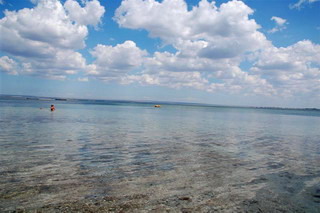 Measurements showed that, with the steady dynamic stationarity in the bay of Donuzlav there are two countervailing water flow. With the surge winds compensation flow "from the bay" cover the top layer of water, and flow "in the bay" –the bottom. The thickness of the upper layer is from 4 to 6 meters, and of the lower is 2-11 meters. The average flow velocity in the layers varies from 5 to 14 centimeters per second, but in some cases the rate may exceed 50 centimeters per second. The velocities in the lower layer of flow are usually higher than in the upper. The data analysis of measurements of velocities also allowed to reveal that the mentioned above characteristics of the individual layers of currents of flows of opposite directions depend on the intensity of the surge that is ultimately these characteristics depend on the speed and duration of the wind and its phase, or at the beginning of the surge or during dynamic steady-state.

Due to the spatial location of the bay of Donuzlav and characteristics of the rose of winds in the region an intensive exchange of water between the Black Sea and the bay of Donuzlav is achieved. South winds are of average rate of 1 to 5 meters per second and have greater repeatability than the winds of the northern points of the compass. In most waters of the Donuzlav bay salinity differs from sea water in the Black Sea, ranging from 17.9 to 18.2%. In the exit places of underground spring waters in the Donuzlav bay and also as a result of spring melting of snow and flooding in the bay areas, fresh waters are formed. 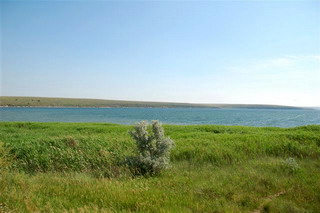 The modern flora and fauna of the bay of Donuzlav has a wide diversity of species and includes freshwater and marine organisms. The Donuzlav bay is prospicious for the reproduction, feeding and wintering of valuable commercial species such as mullet, sturgeon, herring, flounder, mussels, shrimp and others. The ichthyofauna of the Donuzlav bay includes some species listed in the Red Book; all counted at least 52 species from 30 families, 30 species of which are indigenous or settled and 22 species are migrants.

According to the results of research, the Donuzlav Lake is characterized by high biological productivity and it is one of the most promising reservoirs of the Crimea for organization of the cultivation of algae, invertebrates and fish of course. Preliminary experiments on artificially breeding of giant oysters in the bay had positive results. Scientists have made an assessment and calculation of the carrying capacity of the Donuzlav bay for mullet and flounder as commodity products, which in the case of breeding of mullet and flounder will be according to preliminary estimates about one and a half thousand tons per year.