Here the Black Sea has amazing features. Water of the Black Sea at the tesoirt is claen and transparent, while characterized by high salinity, about 17-18 grams per liter. This high level of minerals in water makes it very valuable therapeutic factor. In sea water many elements of the periodic table are dissolved, including such vital trace elements like zinc, potassium, phosphorus, manganese, iodine, bromine, copper, gold, calcium, magnesium and others. Besides water of the Black Sea contains dissolved minerals and provitamins, hormon matter and biogenic stimulators as well as oxygen, nitrogen and other gases. Salt composition of water of the Black Sea is largely similar to the salt composition of human blood and lymph; and many vital for human body salts and minerals such as iodine, bromine, phosphorus are absorbed directly through the skin during bathing in the sea. This is one of the reasons for which after bathing in the sea you feel cheerful, fresh and full of energy.

As the Black Sea at the resort has healing properties, many people from aroud the world prefer to spend vacation here in this beautiful Black Sea resort that is created by nature itself and where perhaps the best beaches of the Black Sea for swimming and rest. 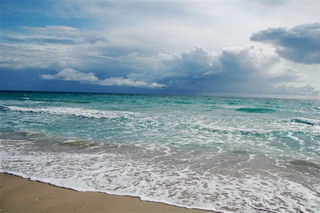 The Black Sea is unique and differs much from other seas with its topography, composition of water and structure. At different depths of water ichthyofauna is much changed. It happens because the Black Sea has two layers of water that are not being mixed together and they are in literal sense dead and living water. A cold boundary layer is between them. Unusual separation comes due to the special topography consisting of the continental shelf and the basin which can accomodate up to five times more water than the Baltic Sea, although the areas of these seas are almost identical. The temperature of water at the surface of the Black Sea depends on the sun and warm air and the temperature of the lower layer is the same all year round and is about nine degrees Celsius. Comparing with the more southern warmer seas and nothern which are not well heated, the Black Sea is a happy medium, a source of cheerfulness and good humor where the temperature of water around 23°С and above is the optimal temperature of water in the Black Sea for summer rest and swimming and also for Thalassotherapy. 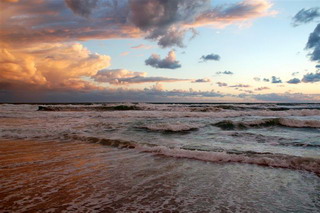 The average temperature in the Black Sea at any point of latitude and longitude is determined by season and depth. In summer and winter water temperature changes every ten meters away from one-tenth of a degree up to five and sometimes ten degrees. The higher the sun rises with the coming of spring and summer the more depths of the top layers of living water warm up, and greater temperature difference between top and lower layers. Such dynamics of water temperature in the upper layer is characteristic for the depth of about forty meters. So in the second half of thed summer and in autumn sea warms up to the depths of more than twenty meters; for example in September at the depth of 20 meters the temperature of water in the Black Sea depending on the location is about 20,2°С and below is 10,1°С. When the sun is not high the temperature is lower and changes with a depth not significantly. At depths of more than fifty meters down to the cold boundary layer, salinity and water temperature vary smoothly. The boundary layer has a low temperature of about 6°C, as in the lower layer of the Black Sea, it is the same for all the year.

Who dived into the Black Sea at a depth of less than ten or even five feet, probably felt on itself drop of the temperature. I myself have experienced, these differences diving at the resort Donuzlav at the South Spit, although this is shelf area and a sloping bank but you can feel the differences often. 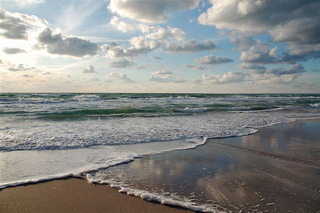 However, on the Black Sea shelf near the southern coast of Western Crimea water warms earlier. In this region it is not only the highest annual average water temperature in the Black Sea, but also a very early start of the swimming season, in May, the sea water is heated to 16°C, and June 20,2°C. 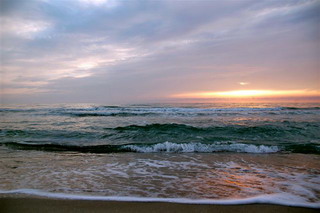 Best of all heated is the Black Sea on the local area near the Donuzlav mound or and the South Spit and further, where the Black Sea created excellent sandy beaches. Due to shallow, gently sloping shore of a brighter, as well as a greater number of sunny days, water here warms up earlier, faster, and more. The temperature of water in the shallow waters of the Black Sea resort of Donuzlav in summer greater than the temperature of water of the area sometimes up to 4°C. In May, it reaches 18°C in June 21.3 July 23.7, August 24.8 and September 23°C. Nature itself has created a magnificent coastline for swimming and rest, and washes it with the most warm water. The water of the Black Sea not only refreshes us in the summer and gives vigor, it also has antiseptic properties. Because of this peculiarity of living water as well as its unique use of minerals and salt compositionw doctors prescribe it for the treatment of upper respiratory tract, heart defects, nervous system and metabolic disorders, with overweight it is recommended to drink half a glass of water three times daily before meals.

So the Black Sea has amazing features, antiseptic and healing properties and is quite different from other continental seas. Ancient historians wrote that it was the most surprising and unusual sea, as such, it has appeared recently, and at the same time it is the oldest body of water on Earth.